Somalian supermodel Waris Dirie has graced the pages of glossy magazines and starred opposite 007 as a Bond Girl. 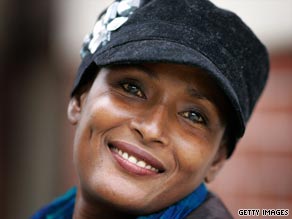 Face for change: Dirie is a tireless campaigner against FGM.

But her glamorous appearances on catwalks and in magazines and films belies the personal battles Dirie has had to overcome.

Dirie is a leading voice against forced circumcision and female genital mutilation (FGM) and struggled to overcome her own circumcision at the age of five. The forthcoming film, "Desert Flower", based on her biography, tells her story.

Yet it is through her charitable foundation that Dirie hopes that the practice still common in traditions in parts of Africa, the Middle East, South American and Asia will not create more cases similar to her own.

Growing up with a nomadic family in Somalia she was one of 12 children. She fled to the London, where one of her uncles was working in the Somali embassy, to avoid an arranged marriage with an older man. She was just 13-years-old at the time.

After working as a housemaid and in a McDonald's restaurant she was spotted by chance by fashion photographer Terrance Donovan and became the covergirl for the 1987 Pirelli calendar.

Becoming the face of beauty products and design houses, her successful modeling career has given her a life far removed from her childhood. Yet for Dirie more importantly it has created a platform to campaign against FGM. In 2002 she created the Waris Dirie Foundation and has been given a number of honors in recognition of her work.