The number of cases of female genital mutilation (FGM) reported in London has risen and some procedures are taking place in the city, a doctor has said.

Dr Comfort Momah, who runs a clinic in Guy's and St Thomas' Hospital, said she sees 350 women and children a year.

The Met said it was aware that FGM was taking place in London and had intervened in 122 cases since 2008, including 25 times this year.

But it said that as it was a "taboo" subject there had been no prosecutions.

FGM is illegal in the UK and anybody convicted for it can be jailed for up to 14 years. The law protects British citizens even if they undergo the procedure abroad.

Dr Momah, who runs one of the 11 African Well Women Clinics in London, said a majority of the cases she saw were from African countries, including Somalia, Eritrea, Gambia, Nigeria and Sierra Leone.

She said: "In London FGM is widely spread and in my clinic we see about 350 women and children with FGM related problems every year and do reversal in about 100 cases every year.

"We do have people calling me or calling other clinics saying I know a circumciser in Leytonstone, I know a doctor who is performing it within the community, but they won't give you the information."

She added that more cases are being reported since 2005.

"I see a lot of teenagers now, self-referring to the clinic and getting information from the internet," the doctor said. 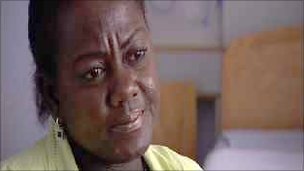 "We need to prosecute somebody if obviously a child is at risk."

The procedure can cause urinary infections, kidney failure, infertility and death.

Salimata Knight, who underwent the procedure in Senegal, said: "I was forced on the floor and I felt something being cut in me and even at that time I did not know what (it) was because at four-and-half years you are not really aware of what it is.

"It makes people suffer, and suffering has no identity, no race and no culture."

Its Project Azure, which engages with the community, said London clinics see about 600 women a year.

Det Con Jason Morgan, from Project Azure, said: "It affects girls, often as young as seven-days-old, so the girl might be too young to remember exactly what happened, where it happened and who did it to them."