There are giggles and shouts as little children play boisterously in the dusty street by the Hadad family home in the village of Abu Nashaba.

Just inside the front door, however, a mother dressed in black is sitting on the floor weeping silently. It is less than a month since the death of her 13-year-old daughter, Nermeen.

The girl died in a nearby health clinic and was buried without a permit from the local authorities.

After an anonymous tip to a government telephone hotline, her doctor has been arrested on suspicion of carrying out an illegal operation to circumcise her.

This case in the Nile Delta governorate of Menufiya has raised fresh concern that, despite a ban passed two years ago, female genital mutilation (FGM) remains a widespread practice.

"She was a very good girl who never lied or gossiped, and she was an excellent student," says Nermeen's grandmother as she shows off her school certificates and English exercise books.

She denies the child was taken for FGM surgery.

"She was sick so we took her to the clinic and the doctor gave her an injection. Nobody hurt her. It was God's will to take her," she says.

Yet in her village, most women say genital mutilation is a procedure they have had done, and that their daughters should also have, to ensure they can find husbands when they grow up.

"We're an Arab country and here it's a must to do this operation. It should be done for marriage," comments one shopper in the market.

"We were brought up to believe in this," a woman stall-keeper adds. "It's been done since our ancestors' time to prevent sexual temptation."

"If it's not done, a girl will grow to be like a man," whispers a shy young mother, repeating a widely held superstition.

Nine out of every 10 Egyptian women have had the procedure, according to official figures. The practice is said to date back to Pharaonic times and is most common in poor, rural communities.

Girls as young as five will usually be taken to a clinic to be cut. The procedure can be very painful and carries serious health risks. For some, it causes life-long trauma.

In 2008, a law prohibiting female genital mutilation, or female circumcision as it is also known, was brought in following the death of a 12-year-old girl.

Some medical workers have since been prosecuted, and clinics have been closed down for carrying out the procedure. 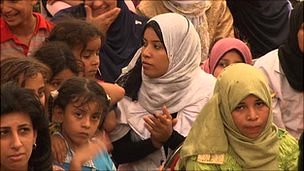 At a special event in upper Egypt, villagers discuss the issue and sign pledges against FGM

Government statistics show the number of girls aged 15 to 17 who have been circumcised has dropped slightly - from 77% in 2005 to 74% three years later.

"The practice has declined, definitely it has declined, but I'm also sure that there are cases happening underground," says Family Minister Mushira Khattab.

"There is conspiracy between the parents and the perpetrators, be it the doctor or the nurse or whoever."

She accepts more work must be done to raise public awareness of the dangers of FGM.

"We started by advocacy to show it is not a religious obligation and has no health benefit," Ms Khattab says. "This is how we have been building up momentum against the practice.

"We made a national strategy at the same time as we were working at the level of the village."

In a huge festively decorated tent in al-Hawatka in the upper Egyptian governorate of Assuit, about 500 locals recently gathered for an unusual event.

Children sang and women stepped up on stage in front of their husbands to openly discuss the problems of female circumcision.

Afterwards, with the backing of the community, they signed pledges not to subject their daughters to the procedure.

For one teenager, Wafaa, the declaration came too late.

"It was very difficult when my mother told me I would have the operation. I wanted to jump from the rooftop," she says.

"Unfortunately, I was circumcised, but I hope that now this won't happen to any more girls."

The meeting is one of a series that has been organised. It took months of work by local charities and international organisations.

"They need to realise that their daughters are suffering because of this practice," observes Nadra Zaki, a child protection specialist with the United Nations' children's agency, Unicef.

"We also always say that you're taking away from your daughter an important part of her body that makes her enjoy a fulfilling life, and that it is a woman's right to decide what to do with her body."